Epidemics have shaped the growth and geography of New York . And one 19th century epidemic changed a neighborhood’s name, too. That’s what happened with the Brooklyn enclave formerly known as Yellow Hook. This farming village overlooking New York Bay was originally part of the town of New Utrecht.

Few people are allowed to go onto Hart Island , the quiet, narrow island in the Long Island Sound, a lonely place in sight of the bustling community of City Island. For over 150 years, Hart Island has been New York’s potter’s field, the burial site for over one million people — unclaimed bodies, stillborn babies, those who died of AIDS in the 1980s, and, in 2020, the location of burials of those who have died of COVID-19 coronavirus.

Source: The history of Hart Island, a place of strangeness and sorrow

Every New York City history buff knows about the Commissioner’s Plan of 1811 in which the street grid of Manhattan Island was laid out by John Randel, Jr. who was given the task in 1808. Randel spent the next few years surveying the island and positioning either metal bolts or marble “monuments” to mark the position of the future street intersections. A few of these bolts still exist in the original location that Randel himself placed them. I have the honor of having located one but am also abide by the honor code of those who have found them to not publicize their exact location in order to avoid bad things happening to these amazing pieces of New York City history.

During the wonderful Open House New York event in 2018, the full original map of the Commissioner’s Plan was on display at the Office of the Borough President.

The great “Atlas Obscura” posted a great article about the bolts and the crazy people like me, which you can read here.

Below are some great resources and stories of the bolts and the Plan itself. 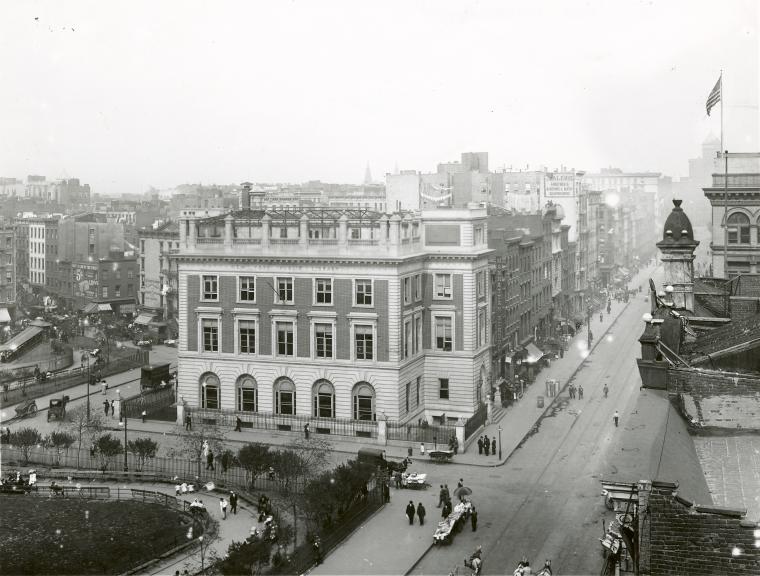 Below is a picture, facing east, of Seward Park Library in the Lower East Side at 192 E. Broadway (picture taken in 1911). This spectacular branch library, funded by Andrew Carnegie, opened in November 1909, two years before the 42nd Street main branch opened.